Crypto firms seem to be falling apart due to the prolonged crypto winter. As a result, Bitcoin (BTC) also dropped below $19,000 from its initial resistance level of 21,000.

Contents
Crypto firms in a liquidity crisisBTC prices fall below $19,000

As June closed with low prices, July opened with an even worse crisis for the whole blockchain industry. Will BTC recover this month?

The Crypto market, which fell shortly after Russia attacked Ukraine and inflation prices surged high, is nowhere rising since February.

In fact, the crypto prices seemed to have dropped even lower than when the pandemic began. Compared to common assumptions that the market will pick up in 2022, January showed a good start and then dropped with no progress for months.

In June, the NFT market also came under the radar. Although NFT investors had been struggling, June became a depressive month as the top-selling blue-chip NFTs dropped from marketplace rankings.

As July began, the crypto community saw a sudden decline in prices due to the macroeconomic crisis among crypto firms.

Crypto firms in a liquidity crisis

The news about crypto firms in a liquidity crisis surfaced after Three Arrows Capital fell into liquidation.

3AC had a huge reserve for LUNA/UST, so when the Terra crash happened the crypto firm struggled to pay its dues and eventually went into an extreme crisis. Following the news, various crypto companies that were to receive investment from 3AC began to liquidate.

FTX, Deribit, and BitMEX were the first ones to report that they backed off from their partnership with 3AC.

Similarly, Babel Finance, Celsius Network, and CoinFlex paused withdrawals and other financial services. The firms announced they were trying to recover from the extreme market conditions.

Just like crypto firms fell due to the falling cryptocurrencies market, BTC declined, even more, when the firms paused their services. Bitcoin fell to even lower rates to $19,000. Within 7 days, BTC has dropped 10.13% and now trades at $19,185.

In an interview with CNBC, Yves Longchamp, head of research at digital asset-focused SEBA Bank said, “Bitcoin continues to be under pressure as other assets are. The mix of high inflation, rising interest rates, and recession weigh on cryptocurrencies.”

According to various experts, more crypto firms are expected to fall this month, which will further affect BTC prices even more. With Bitcoin, the altcoins will also fail to resist the falling trends.

However, crypto experts believe the prices might gradually recover too since many new projects are incoming this year. The fall of prices due to crypto firms might alarm many people but bullish traders still hold on to the hope of seeing prices increase after the Fed tightening cycle happens.

The U.S. government has been making an effort to recover the stock market and crypto market after it announced a CPI increase of 8.6%. Traders hope to see some improvements in the global market in the coming months. 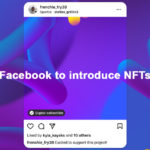 Facebook to introduce NFTs: will the new update push the NFT market up?
Next Article