Yat Siu, the Chairman of Animoca Brands and the owner of Bored Ape #9730, celebrates the debut of his NFT on a clothing line at New York Fashion Week 2023 designed by Vivienne Tam. This is the first time a Bored Ape NFT has been used in clothes for a fashion show.

Bored Apes are taking over the world by storm. From music, entertainment, promotion, mascot, and now Fashion too! Since the beginning of this NFT collection, Yuga Labs wanted it to become a proper Web3 brand by giving ownership to the NFT holders, allowing them to use Bored Ape NFTs for various activities across the world.

Some examples of how owners are using Bored Ape NFTs for commercial or personal use include Snoop Dogg and Eminem’s collaboration video featuring their Bored Apes, many owners have also introduced Bored Ape-themed restaurants, and now a clothing line featuring a Bored Ape.

Like many NFT holders, Yat Siu also experimented with his Bored Ape by allowing a global NY fashion brand, Vivienne Tam, to produce a clothing line inspired by his NFT for this year’s NYFW runway show.

New York Fashion Week came with a lot of clothing styles paired with technological advancements. For example, Tommy Hilfiger distributed free NFTs during his runway show for the attendees to mint.

But Vivienne Tam did something different. They incorporated the Bored Ape NFTs as part of the lifestyle fashion to join the hype trend. Usually, fashion shows reflect the world trends over the year, and this brand came up with the most creative interpretation of how Bored Ape could be used for a clothing line.

According to the designer, she wanted to bridge fashion with open metaverse and NFTs. “‘NFT, cryptocurrency, DAO,’ it’s like jazz music; either you get it, or you don’t,” Vivienne Tam said, “Emerging from the world of gamers and young men, a new vocabulary is emerging, rewiring the current fashion landscape as we previously knew it.”

She blends genders and generations together by featuring blue-chip NFTs such as  CyberKongz, Awkward Astronauts, CryptoPunks, and Bored Ape Yacht Club, using embroidery and prints.

When talking about gender gaps, she shared that “FinTech has been primarily driven by a male perspective.” Tam wanted to give a women’s perspective on this technology” via her fashion line. She believes the technology will thrive if more women are involved in the industry.

“I see the Vivienne Tam brand as being the bridge between the two worlds: old world, new world; physical world, virtual world,” she added.

Yat Siu was more than thrilled to see his Bored Ape debuting on clothes. On Twitter, he congratulated the designer for a successful fashion show and also praised the look of his Bored Ape on the clothes.

Following the fashion show debut, Yat Siu also asked the designer if he could buy the clothes from the line using ApeCoin ($APE). Vivienne Tam hasn’t responded to the question as of yet, but there might be a possibility of this happening soon.

Other than Yat Siu’s Bored Ape, there was also a dress with tons of Bored Apes printed on them, which might also be done with the permission of the owners. 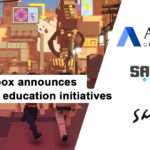