BMW, a German car manufacturer, is entering the blockchain in Thailand by introducing a new Loyalty program built on Coinweb’s infrastructure while utilizing the BNB Chain for transaction processes.

According to the official statement, blockchain integration will be launched in two parts. For the first part, BMW will be shifting its daily workflow for automated processes and the financing services with Thai customers will take place on a cross-chain ecosystem.

In the second part, Coinweb will launch a SaaS Web3 app related to the Customer Loyalty Programme featuring incentivized blockchain-based rewards for BMW clients only, which can be redeemed for benefits such as buying a service or a good.

“We hope that once this project is fully launched, it can be used as a benchmark to prove that traditional businesses can fully leverage blockchain technology”

It is true that the new Web3 initiative by BMW has opened a new possibility of blockchain in businesses. Recently, Starbucks adopted this technology for its loyalty program rewarding its loyal customers with exclusive NFTs and rewards. 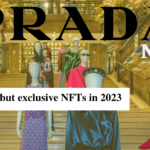 Prada to debut exclusive NFTs in 2023
Leave a comment