Rockstar Games, the creator company of the famous video game Grand Theft Auto, has announced a ban on the use of cryptocurrencies and NFTs from its Role-Play GTA V servers.

GTA is one of the most-played games in the world. The newly launched GTA 5 online in 2013 was introduced as an open-source space with a role-playing server. This opened up new opportunities for the community to interact with players and create their own experiences.

Recently, on November 23, 2022, Rockstar Games updated the “Roleplay (RP) Servers” statement on its FAQ page about licensing and Take-Two’s legal enforcement policy, which added that the platform will no allow

“…the sale of virtual currencies, generating revenue via corporate sponsorships or in-game integrations, or the use of cryptocurrencies or crypto assets (e.g. “NFTs”)…”

The game wants to enforce its PC Single-Player mods policy where the users are not allowed to use virtual currencies or sell any third-party IP digital assets at all. If someone creates a mod based on an NFT project, they will face legal actions from the publisher.

Many players and creators have been utilizing traditional games to launch their digital assets and virtual currencies with ownership. Although they aren’t created by publishers, players can still buy them and own them through the modes. GTA has decided to put a stop to it once and for all.

Like Mojang’s stance on Minecraft, Rockstar Games also shared that these virtual currencies and NFTs do not align with GTA’s game values and so they have decided to investigate anyone who promotes third-party intellectual property.

Compared to Minecraft, GTA players seem to support this decision. They believe this new policy will prevent the game from losing its authenticity in the long run. Many users believe the nature of NFTs cannot align with these traditional multi-player games.

This leads to yet another speculation of whether the upcoming GTA VI will add NFTs and virtual currencies or not. Until recently, there were rumors that Rockstar Games was considering adding a crypto reward system to the new game but with the new policy updated for GTA 5 online, will the publisher only allow its own created NFTs and crypto token? Is Rockstar Games’ new policy limited to GTA V online or is this a permanent statement made for its upcoming games as well? The answer is still unclear. 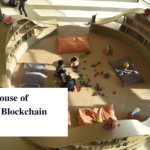 Sharjah’s House of Wisdom for Blockchain Education
Next Article